Developed in 2000 by Anders Hejlsberg at Microsoft, C# is a modern object-oriented programming language. It is a general-purpose language which is mainly designed for developing apps on the Microsoft platform and requires the .NET framework on Windows.

With extensive support from Microsoft, C# has grown quickly since it was first created. It is particularly used to create Windows desktop applications and games. C# is also used to develop web applications and has become increasingly popular for mobile development too.

The C# programming language integrates well with Windows. There isn’t any need of special configurations to get a C# program to run in your Windows environment. Whether it’s a web application, a Windows service, or a desktop app, C# programs are easily installed on the network.

It is easy to find additional developers for C# language whether it’s for a contract or full-time basis. As C# is one of the common languages that programmers learn, additional developers can be easily found for the growth of your business. Also, this programming language is closely related to java, so developer can work on both of it at the same time. 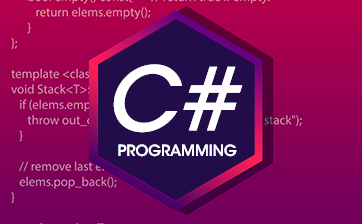 Though compiled code can prove to be advantageous but it has some disadvantages. It is quite difficult to work with as the code must be compiled every time you make even a minor change. A single change in your code makes the user recompile the whole application and deploy it again. This often leads to added bugs if a minor change isn’t thoroughly tested.

Microsoft has stopped supporting older .NET frameworks after a few OS upgrades. Since C# is a part of the .NET framework, the server must run its application must be in Windows. Many new companies work with Linux servers since it’s a much cheaper environment. You need Windows hosting to run a .NET application. If your company uses Windows workstations and servers, .NET is the easiest to integrate.